Antiquing Kitchen Cabinetry in New York City and a Surprise

Posted on July 1, 2012 by Linda
A short while ago I had to help a client in Manhattan who had had a flood in her kitchen – which marred the cabinetry that I had painted and antiqued nearly 6 years earlier. The only day I could go was when President Obama was in town. That meant I was going to experience some nerve wracking, heart attack inducing traffic as I live on the eastern end of Long Island and the drive to Manhattan can take over 2 or more hours. But the slow traffic allowed me to take some shots along Central Park West while I was waiting to move uptown. 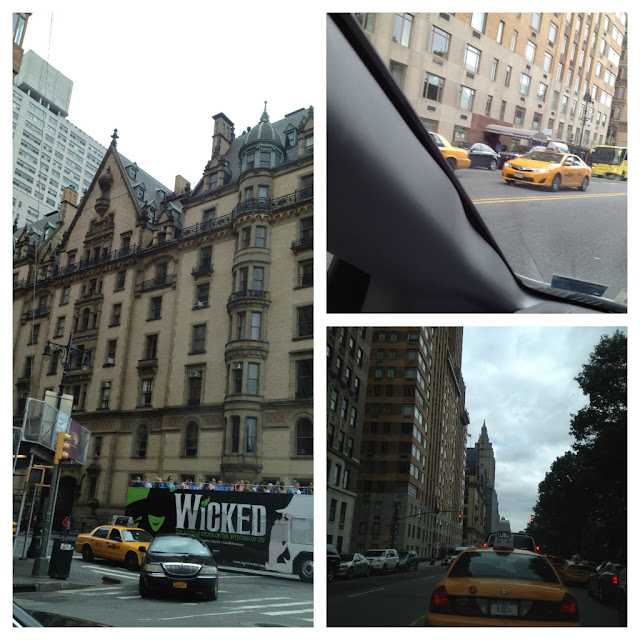 Heading uptown:The large pic on the left is the famous Dakota building, where John Lennon lived

My client’s small NYC kitchen had looked darker and smaller with mid toned maple cabinetry – which was in great shape but the somewhat dark tone of the cabinets didn’t help the small space. I wish I had taken shots of “before” but who knew then I was going to have a blog!! 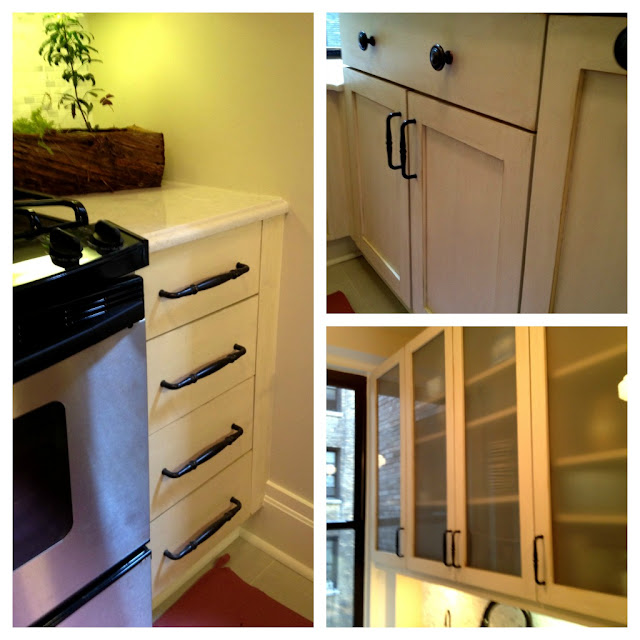 The finished cabinetry
The flood had damaged two major areas in the kitchen and all along the baseboard as well.  We first primed and repainted the areas with the same paint we had used – an off white.  After that was dry, I looked at my recipe that I had used for the antiquing and made up a sample glaze.  I used the exact same measurements of tints – some Van Dyke Brown and Raw Umber – but the glaze wasn’t matching.  I guess it could have been that the cabinets aged somewhat in 6 years.  I had to add a touch of a warmer brown to match it exactly. 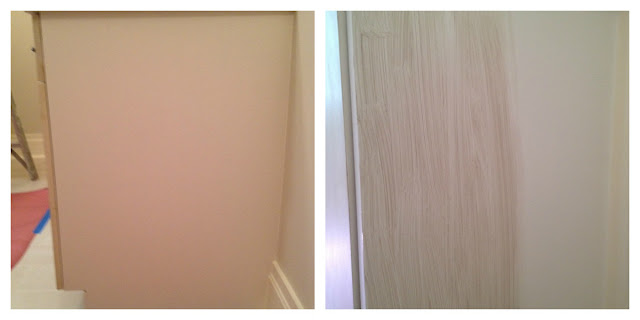 Before…and the application of the glaze with a chip brush

All the glaze is on…just needs to be manipulated and smoothed.  What’s that on the right? 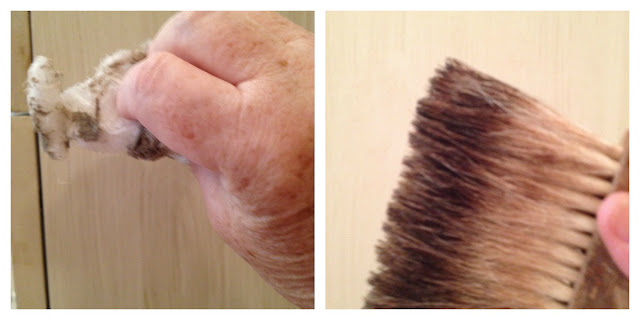 Pardon my fat, old unmanicured fingers – but I thought it would be helpful to new faux finishers/DIY homeowners to see how how I gently age a painted cabinet. The cheesecloth is great for moving the glaze around – you have more control of how much you want to remove.  The cheesecloth can also help you push some glaze into crevices etc to get the look of built up dirt and age. The badger brush – which should be in everyone’s arsenal – softens and smooths out a glaze.  It helps to give the cabinet a more natural, softer look. 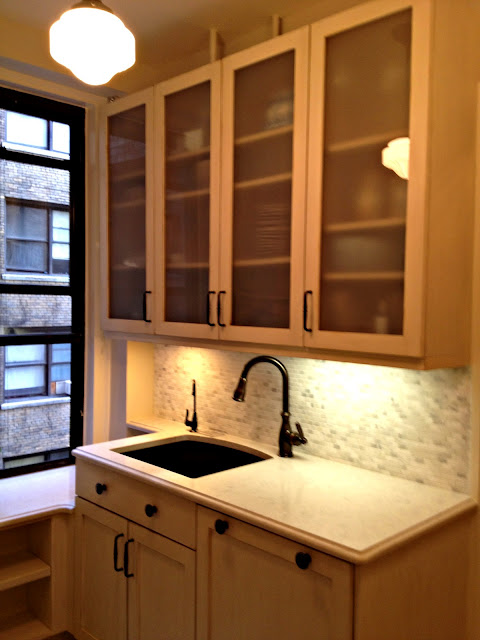 While I was antiquing the cabinetry 6 years ago, the powder room in the apartment was one of the tiniest I had ever seen.  I suggested to my client that while I was painting and antiquing the cabinetry, I could have one of my artists come in and paint a quick, impressionistic mural that would help make the room seem larger…more expansive and interesting.  She agreed – and so it began. Here are some images from the room. 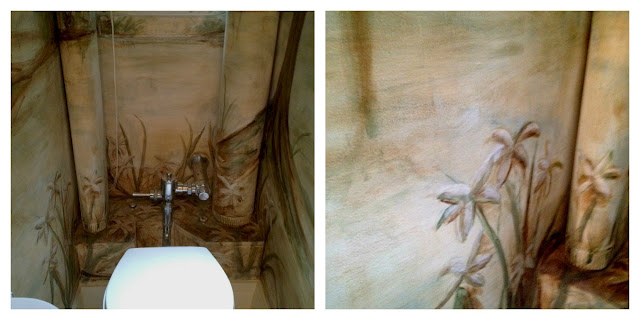 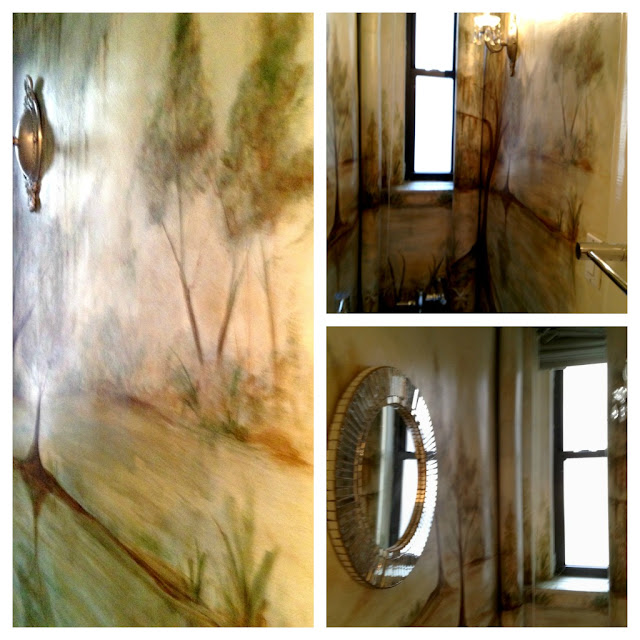 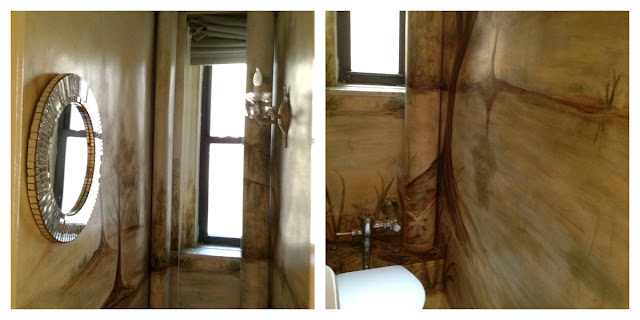 See how tiny this powder room is? You really need something interesting in here – or else you’ll get claustrophic being in this space!

So, after a day’s work it was time to fight the traffic again and head back home.  It took nearly 3 hours to drive back but I felt great that the day went well and that my client was happy!  I took some parting shots while driving (bad girl), but I thought you might like to see them! 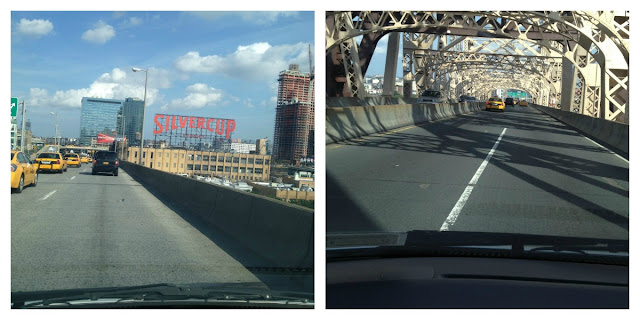 “Slow down, you move too fast!”  Going over the 59th Street Bridge!

Hope you enjoyed my day in New York City.  Let me know if you have any comments or questions – would love to answer them.

Sharing this project at…

Evolution of a Powder Room: Removing Yet Another 70s Era Wallpaper
This entry was posted in Portfolio. Bookmark the permalink.