Some Sunny Shots for a Snowy Day

I am doing some armchair gardening today because we had snow on the ground this morning – and I felt like giving myself a break from winter. 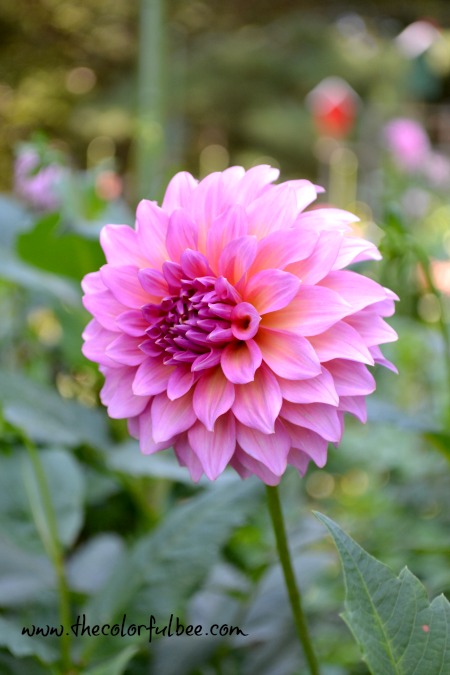 I took all of these photos last fall in the dahlia garden at the Bayard Cutting Arboretum near my home. I was supposed to enter a few of these pictures in the yearly contest that the Long Island Dahlia Society holds every year – but I missed it {thinking I had another week to submit..oh well I will enter this year for sure!} I got some really good bohkeh {the blurred stuff in the background!} on some of the shots. 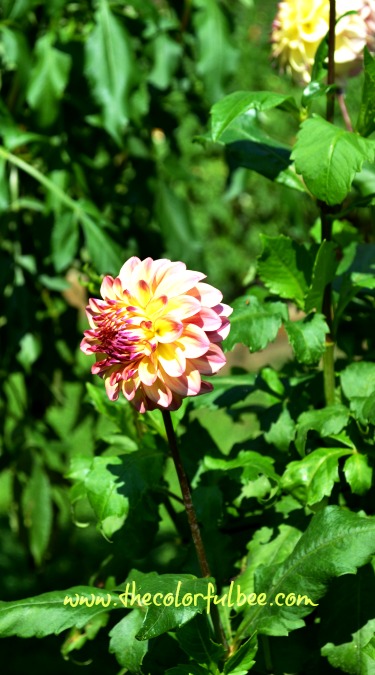 I didn’t do much editing to any of these pictures – I only reduced the size and I just adjusted til I got to a look I thought represented what was in my memory.  I think that the beautiful colors of these flowers speak for themselves, don’t you think?

This year, I am going to be more serious about growing dahlias in my yard.  I only planted about 4 or 5 of them a few years ago and I loved how they looked in the bed I have right next to my deck.  I didn’t dig them and over-winter them {I got too busy with projects that year I remember}, and so that was the end of the dahlia experience for me.  I substituted gladiolas – which I love mainly because they are hardy and they come up every year without me having to dig up the bulbs.  But – they are like the best looking guy at a dance – nice to look at…but they don’t stick around very long!!  So – I have to do some editing and transplanting of my gladiolas (or is it gladioli???) – and bring back some beautiful dahlias. 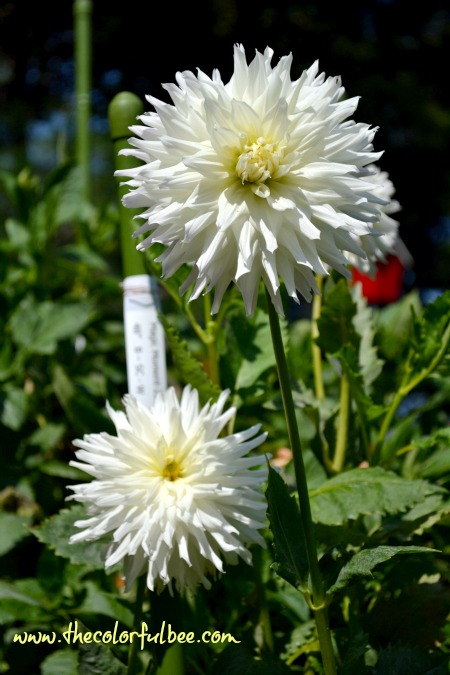 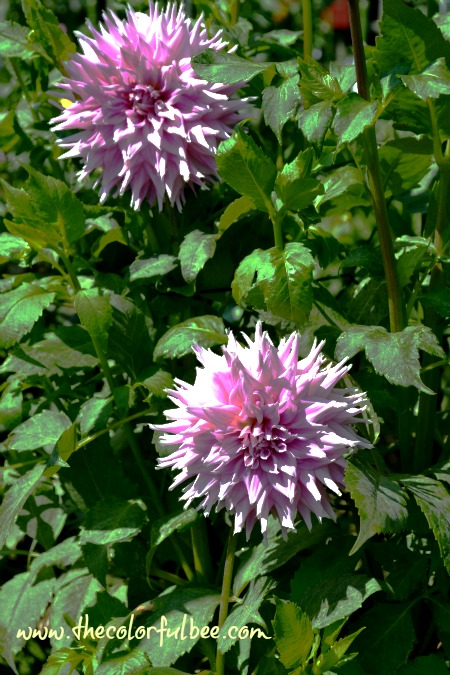 I could easily wake up to these beauties every morning! Couldn’t you? 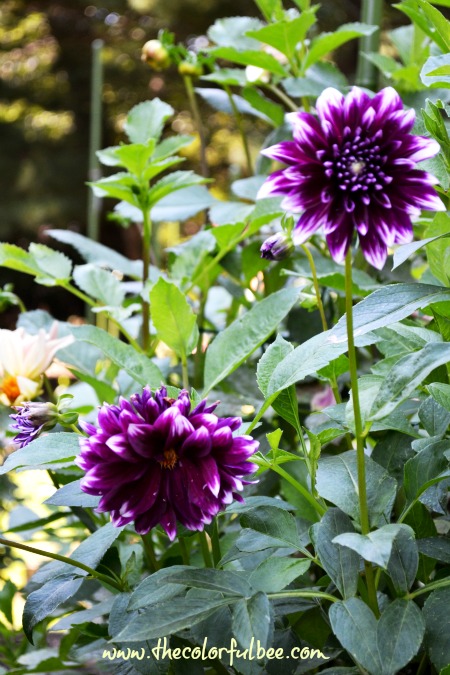 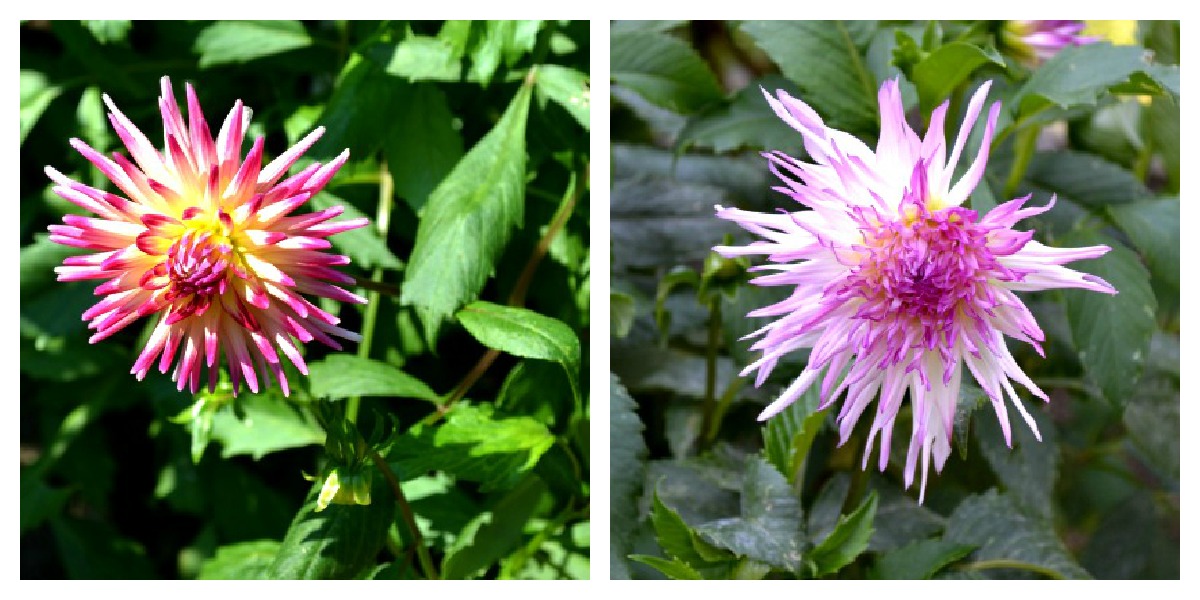 The textural beauty and endless combinations that expert gardeners have come up with is artistry itself.

Just looking at these shots, I can imagine many color schemes.

Have you planted dahlias in your garden {or are planning to?} Let me know your experiences and thoughts in the comment box below!

My Favorite Flower and A Dahlia Show

I remember the first time I ever really recognized a dahlia. I was a latecomer to the love of dahlias, but once I recognized its beauty, power and might – I was a lover through and through. Although I am not a lover of having to dig up the bulbs and over-wintering them – I know that it is so worth doing this because of their beauty and history. 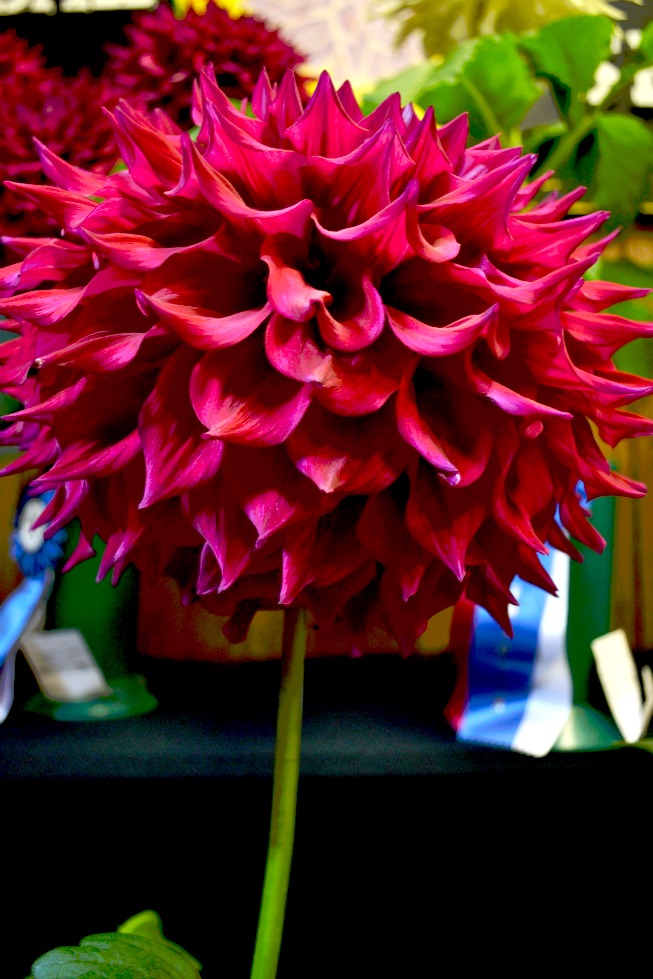 I didn’t know how much I would come to love them – their differences, beauty and their long history. But once I realized the longevity of this flower and its importance – my love of the flower increased tenfold.

It started out as humble wildflowers in Mexico during the Aztec reign.  They utilized the flower for food and medical purposes but most of the history of this flower during that time has been lost since the Spanish conquest. It wasn’t until around 1570 when King Phillip II of Spain sent Francisco Hernandez to study the resources of Mexico that descriptions of these native plants appeared. Much later, in 1651, drawings of the plant were published. In 1789, the director of the Botanical Garden in Mexico City sent some of these native plant parts to Antonio Jose Cavarilles who was with the Royal Gardens of Madrid.  That’s when all the magic of the Dahlia as we know it started to happen.  From these plants, he grew 3 new plants.  He named the genus after Anders Dahl, a Swedish botanist who was the student of the famous botanist, Carolus Linnaeus.  Although in Germany it is called Georgina, after the botanist Johann Gottlieb Georgi.

These plant parts were distributed throughout Europe and finally, in 1929, the scarlet Dahlia coccinea – the nine petaled flower was crossed with the multi-petaled Dahlia pinnata (supposedly) and the modern Dahlia hybrid was started.  This modern hybrid was easier to grow and so it flourished throughout Europe and America. Today, there are over 50,000 varieties of this wonderful flower. 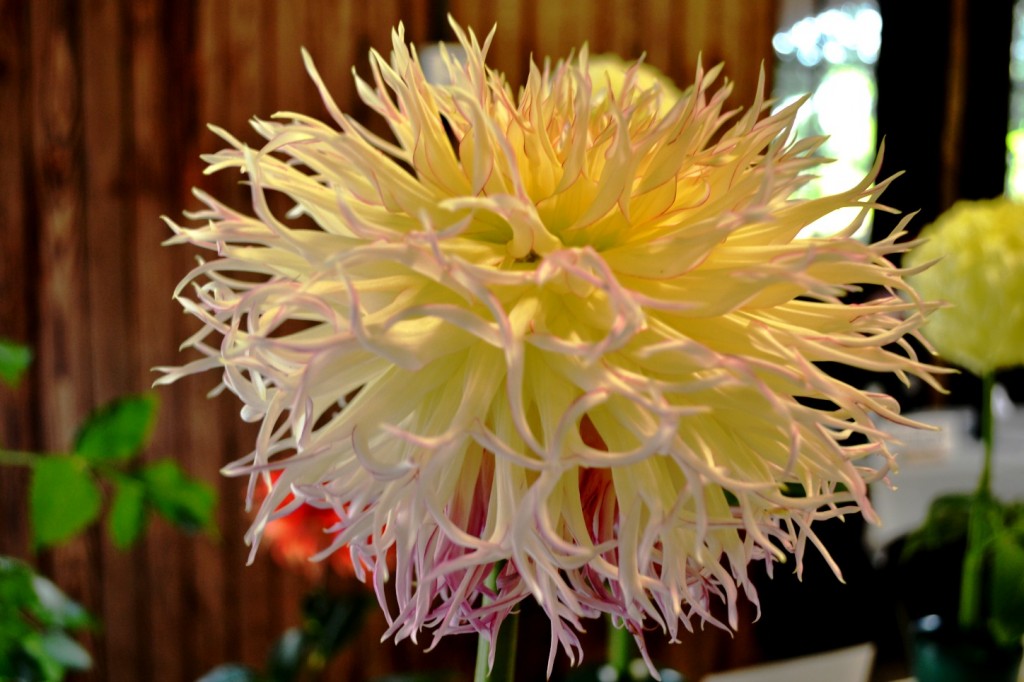 The beauty of the many varieties of the Dahlia inspires me

Every time the Long Island Dahlia Society has a show at the Bayard Cutting Arboretum right by our home, my husband and I go to see all of the beautiful Dahlias that have been cultivated. 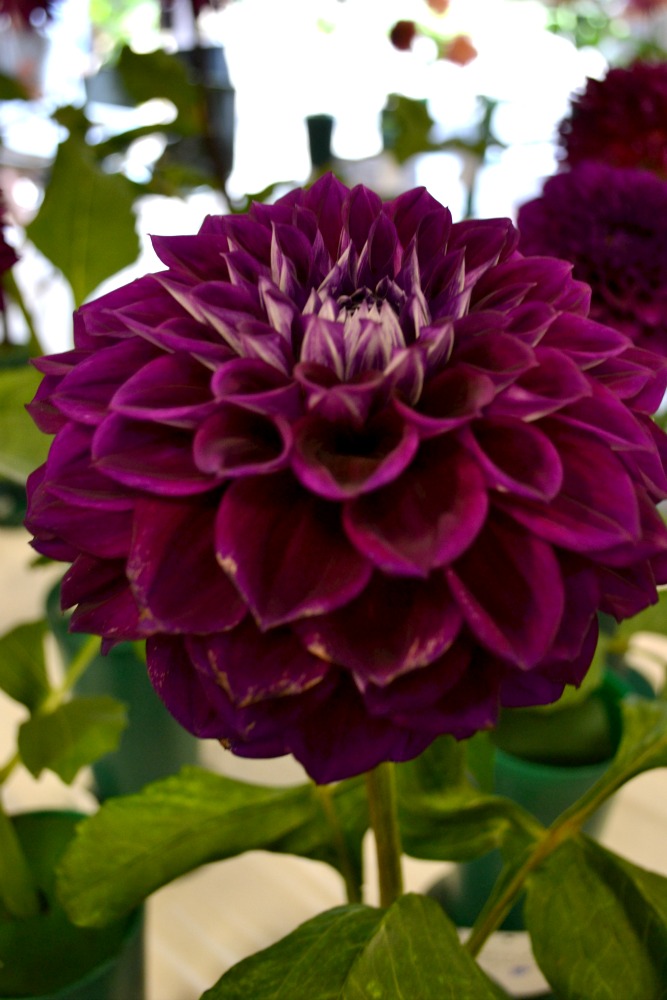 The rich colors of the Dahlia amaze me

The show is very well attended and at the end the society raffles off some beautiful baskets – and then they wrap up the rest of the exhibited plants so that attendees can purchase them. 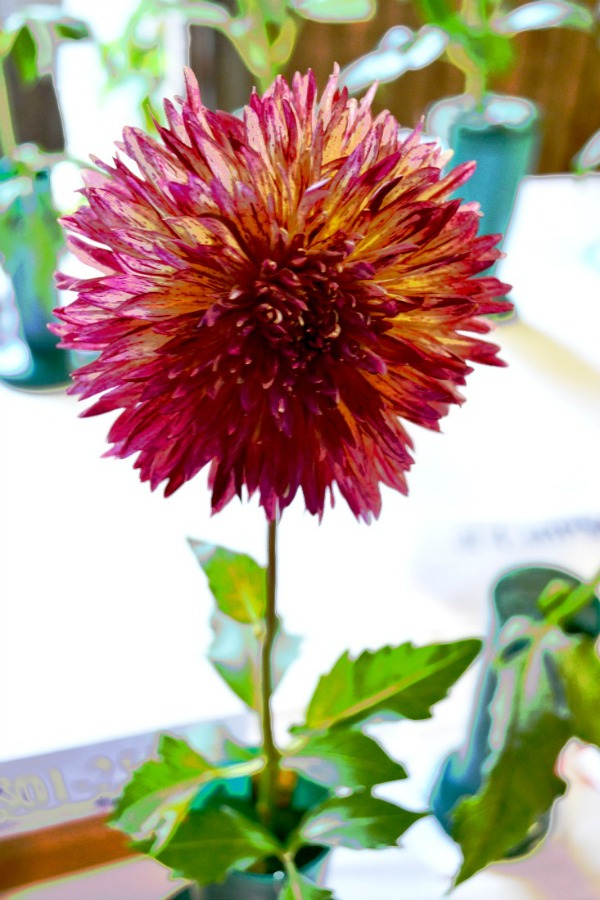 Well – my husband and I used to wait til the end of the show to purchase some of these beauties.  But, I have to tell you that this turns into the most extreme pandemonium sometimes.  The people attending the show turn into raving lunatics – they step in front of you, muscle their way into grabbing flowers that I might have wanted. 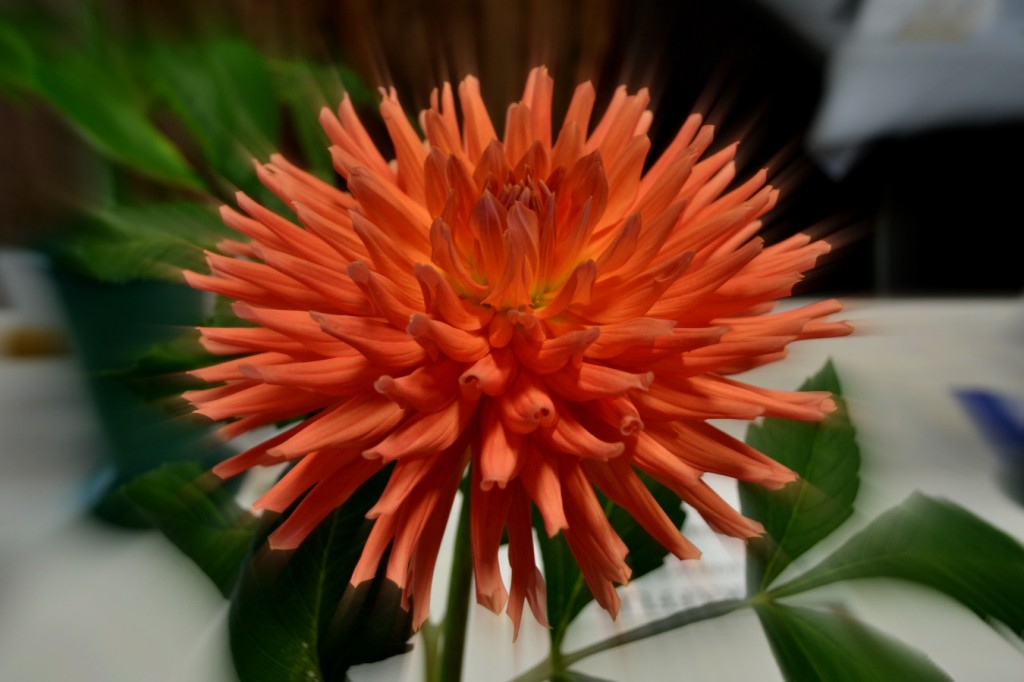 You could create a room color scheme from any Dahlia

It’s crazy – and so now I just take pictures.  It lasts longer!  But I think this craziness attests to the fact that these plants are so well-loved by so many people. 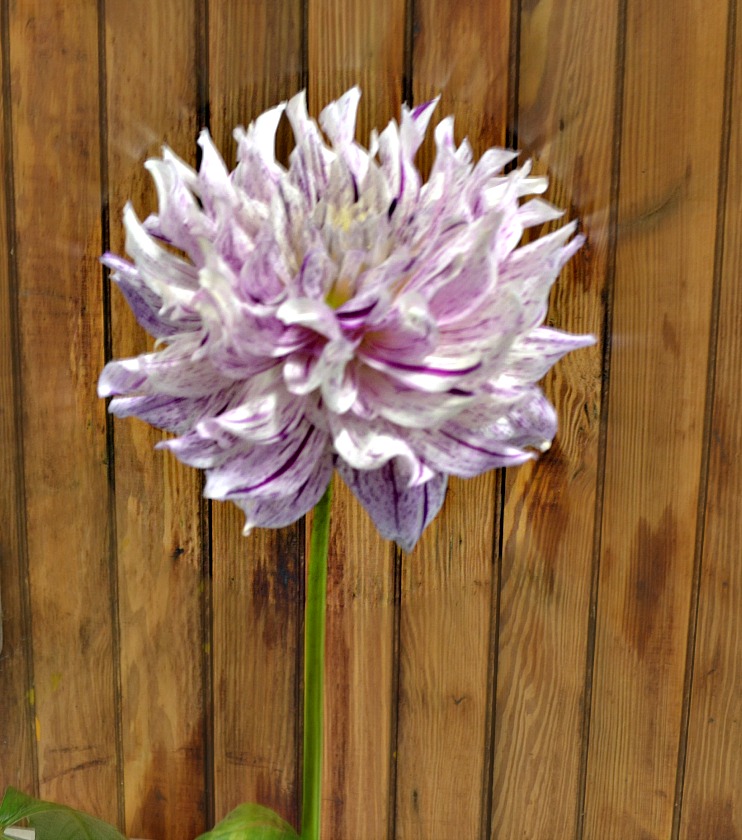 Thank you to the Long Island Dahlia Society for hosting this event.  If you would like to know more about the Dahlia, please visit The History of the Dahlia and The Dahlia Guide – where I derived some of the material for this blogpost.

Hope you enjoyed these images!