Painting Upholstery: A Tutorial on How to Use Annie Sloan Chalk Paint on Fabric

How to Paint on Fabric to Transform Upholstery

I had to give this a try…been reading about it so much on different blogs. I watched Annie Sloan’s YouTube video on the subject, read some other tutorials as well (11 Magnolia Lane  ) and I just decided that I would just jump in and see what happens to a loveseat that I had purchased a few years ago that had seen better days. 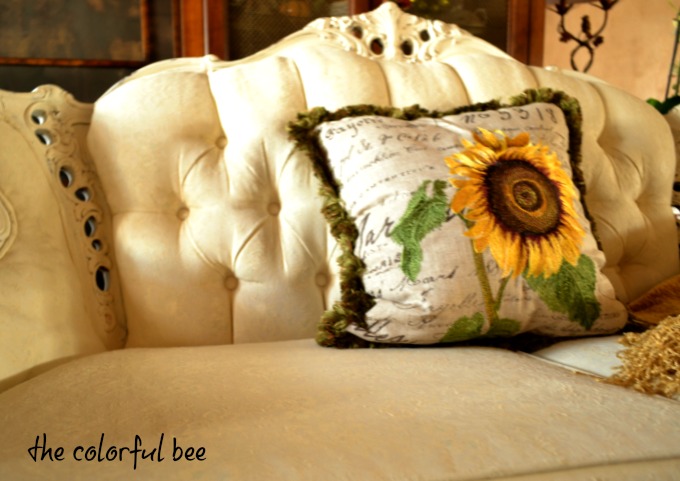 Of course, I started with something “big” instead of a small seat cover – that’s my nature…just go for broke. The worst thing that could happen would be that it looked terrible and I’d have to scrap it or bite the bullet and get it reupholstered. 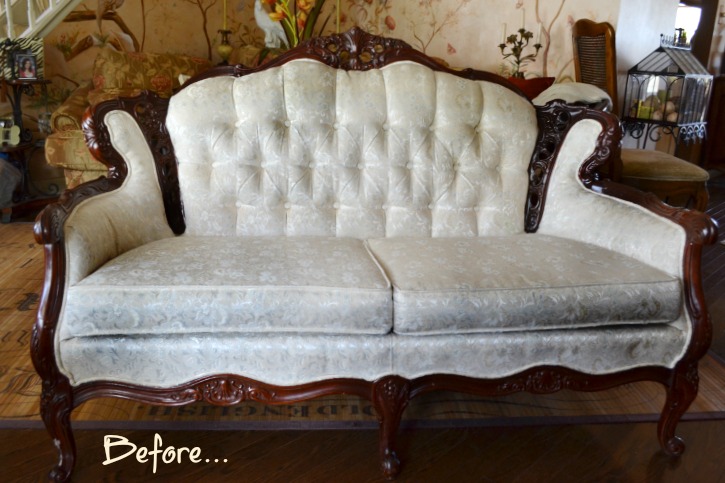 Here’s what it looked like when I bought it. I got from a lovely husband and wife who were moving the next day to Chicago and so I was in a position to get it at a pretty good price. I’m not the best bargainer but I got this loveseat, 2 wing chairs and a coffee table – for $150. Not too bad.

I originally bought this furniture for home staging purposes and I did use the loveseat the following month in a house that I staged, so it came in handy. But I hated the look of the dark wood and the shiny (cheap) damask patterned fabric. I knew that this loveseat could look great if you lightened up the dark wood and added beautiful linen upholstery.  That would cost $$ – maybe $800 or more with fabric…and that was just not in my budget at the time. So, the piece sat in my storage unit after the house was sold. 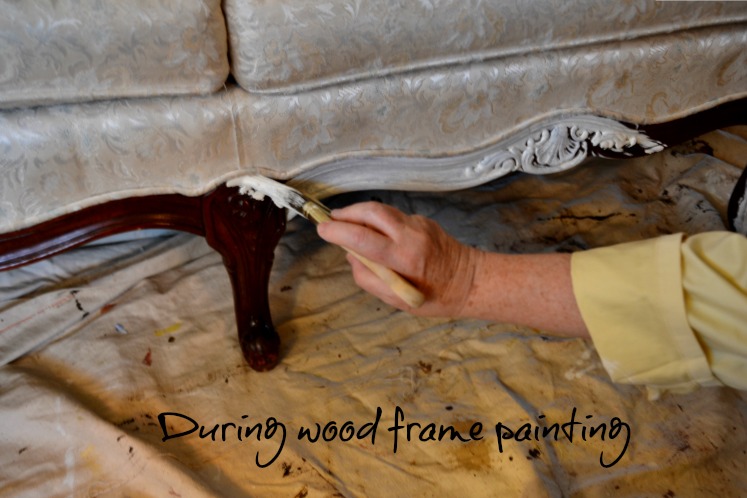 A few months later, I thought I would just start working on this poor little loveseat, so I brought it back home. I started with just painting the dark wood with Annie Sloan Old White Chalk Paint and distressing it a bit first to see if that could improve it – and it did. 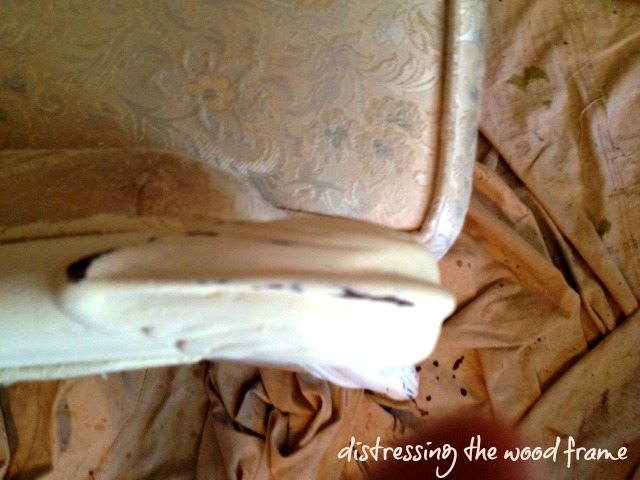 Wet sanding back to expose some of the dark wood

I kept it in my house for a year or so like that and it came in handy when we had holiday dinners etc as extra seating in the dining room. Two of my kids would sit on it at the end of the table – and my husband and I had two seats at the other end…and then I could fit 10 side chairs around the table – easy seating for 14. 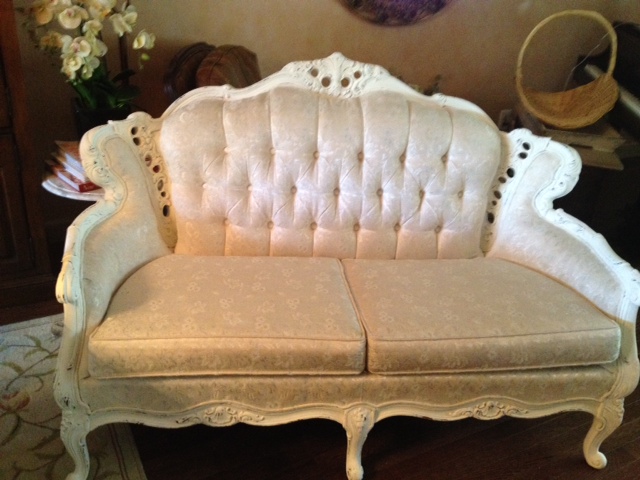 However, the thing I hated the most about the piece was the upholstery. It was cheap, shiny and had some soiled spots on it as well (ones that were stubborn and wouldn’t come out with any cleaner). So, two weeks ago I started experimenting with painting the upholstery. Here’s what I did…

The steps in painting fabric 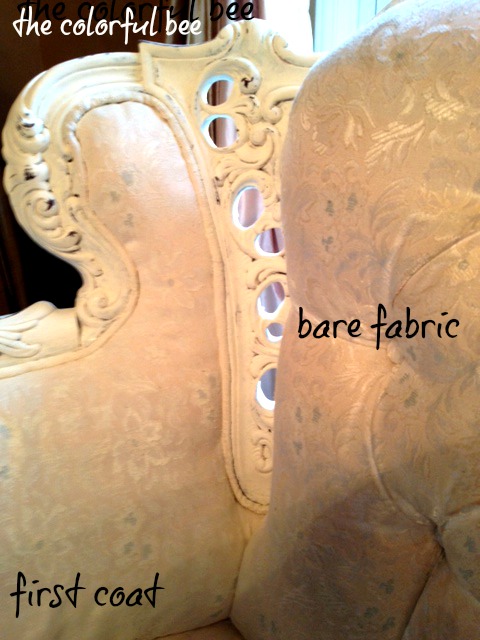 Comparison of one coat of chalk paint vs. bare fabric 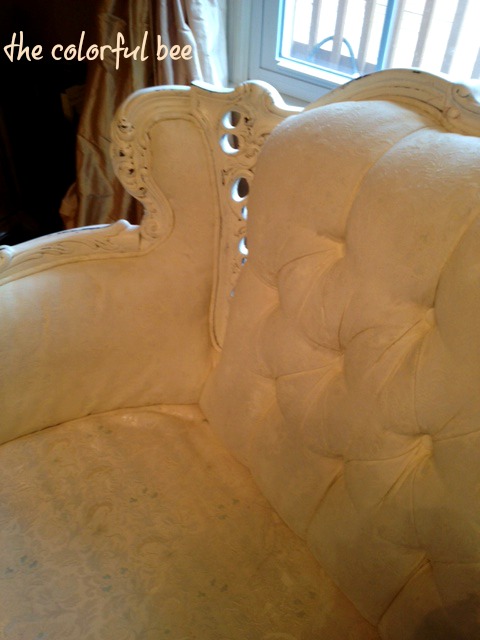 In the tufted sections, I used a smaller brush to get into the folds in the fabric 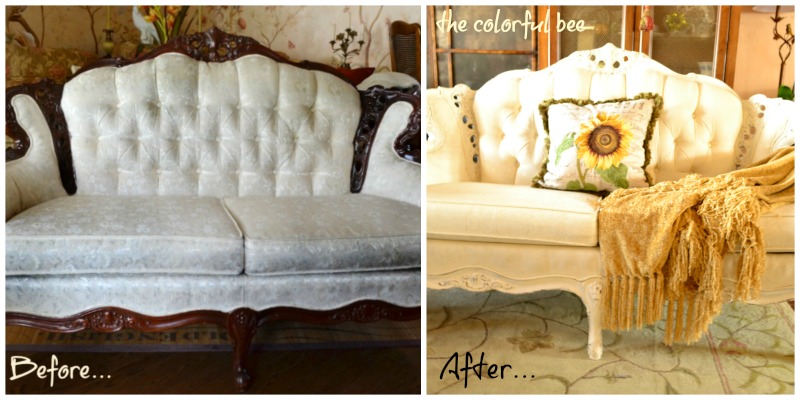 Don’t be afraid of trying this. It’s time consuming (at least on a sofa or love seat!) but on a small chair or seat cover – it won’t take you very long at all to do. So, if you have something that’s been sitting in your garage or your house and you hate the upholstery – try it. With a small chair you could even do it with one of the sample sizes that cost so little.

My advice – try it! You have nothing to lose…except a little time, a little money and some elbow grease.

6 Responses to Painting Upholstery: A Tutorial on How to Use Annie Sloan Chalk Paint on Fabric