Tag Archives: before and after 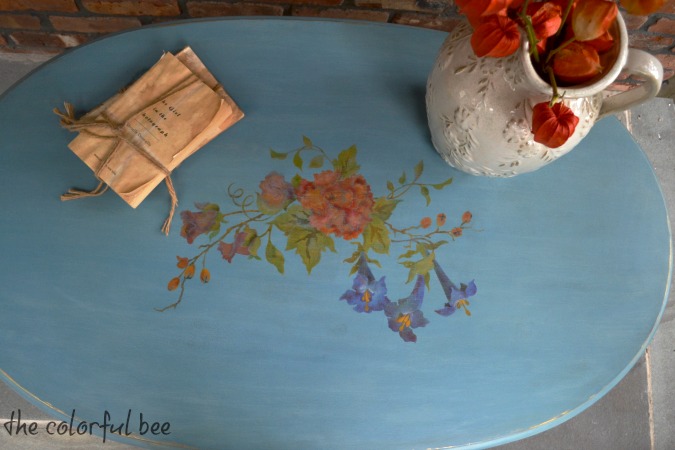 I finally finished a coffee table I had been working on for a while. I didn’t want to post it until I figured out how to tame the super shine I was getting from the wax I put on the table.  I figured it out soon enough…made the necessary adjustments (not hard – a little more sanding back) and it’s a beautiful finished table. END_OF_DOCUMENT_TOKEN_TO_BE_REPLACED

Thanks for stopping by The Colorful Bee! Stay in touch and never miss a post.
*Subscribe to receive an e-mail when a new post is up, HERE.
4 Comments | Posted in Decorative Finishes, interior design, Makeovers, Paint, Tutorials

I always need some instant gratification…how about you?  I thought I’d post some easy things to do when you want to update some items you already have in your home. Paint is the quickest, easiest and least expensive ways to transform just about anything! 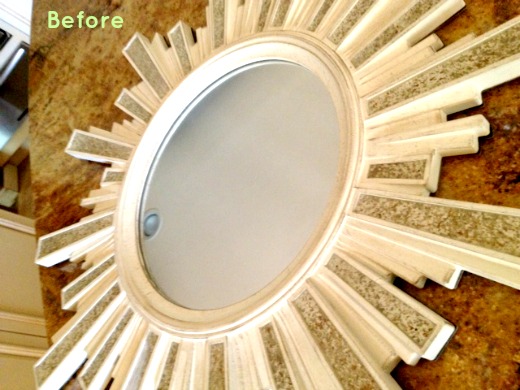 Thanks for stopping by The Colorful Bee! Stay in touch and never miss a post.
*Subscribe to receive an e-mail when a new post is up, HERE.
2 Comments | Posted in Annie Sloan's chalk paint, Decorative Finishes, interior design, Makeovers, Paint, Tutorials

I just love it when readers of my blog call or email me to help them create a dream they have in their head for their home.  One reader (actually a husband and wife) emailed me a few months ago to see if I could help them gild (gold leaf) a powder coated railing they were having built and installed in their home.  “No problem,” I told them in a follow-up email.  “Are you sure you want it “gold leafed…real gold leafed?” I asked.  “Yes!” was the answer. 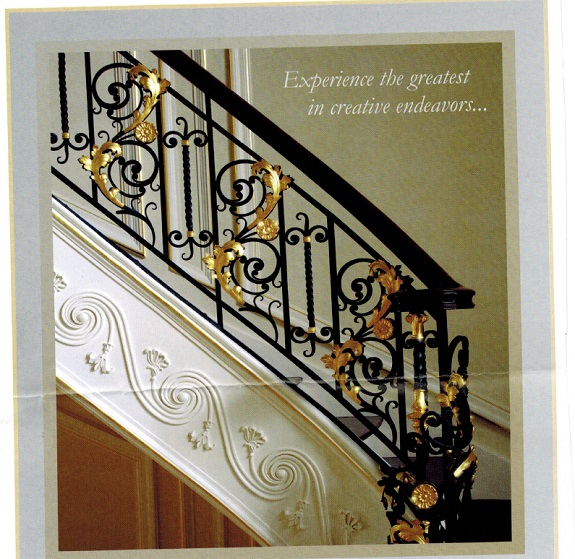 END_OF_DOCUMENT_TOKEN_TO_BE_REPLACED

Thanks for stopping by The Colorful Bee! Stay in touch and never miss a post.
*Subscribe to receive an e-mail when a new post is up, HERE.
2 Comments | Posted in Decorative Finishes, interior design, Makeovers, Paint, Tutorials 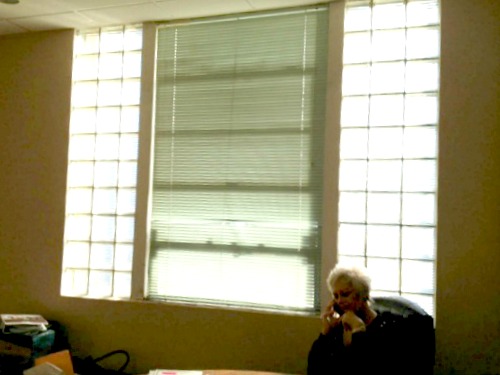 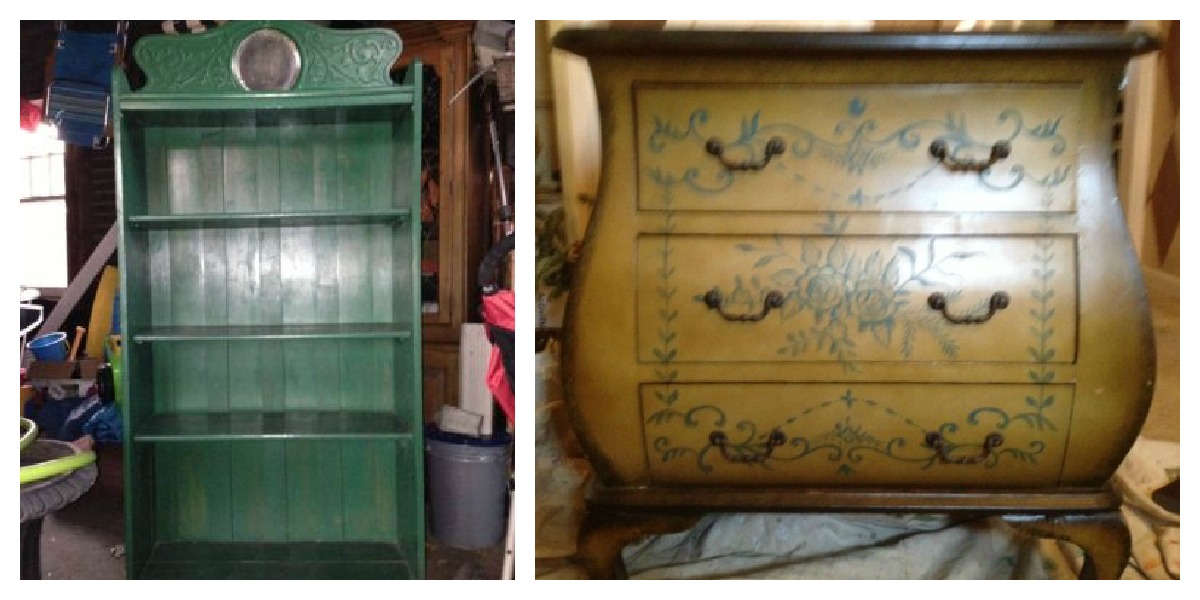 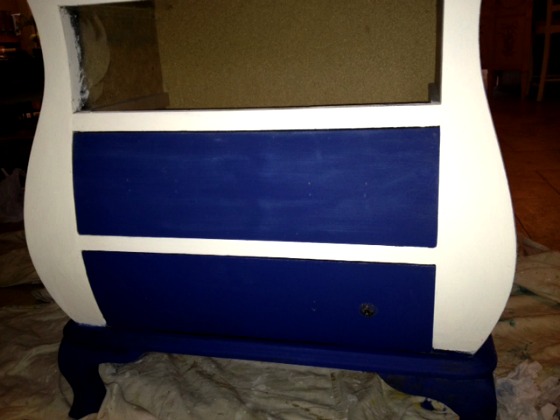 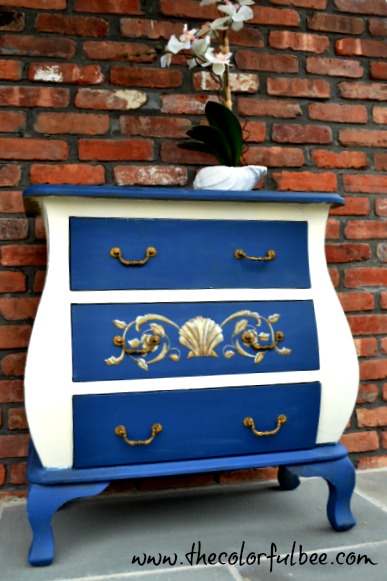 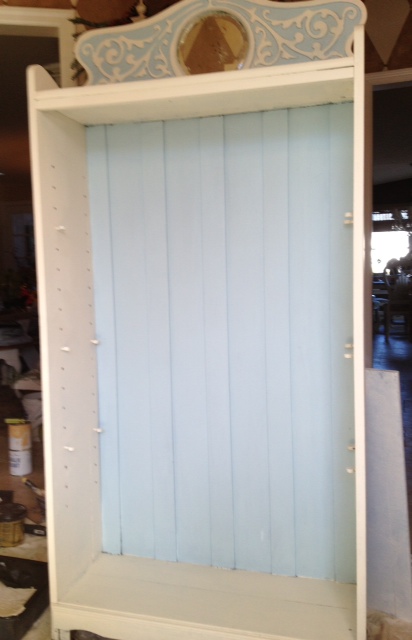 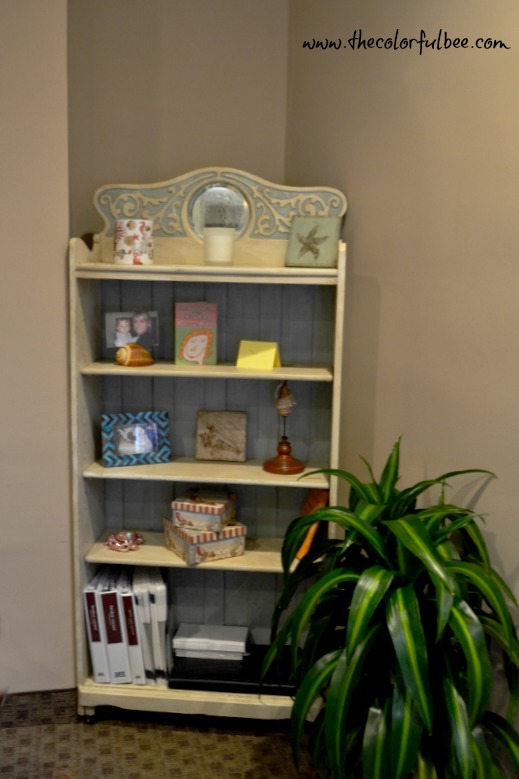 Thanks for stopping by The Colorful Bee! Stay in touch and never miss a post.
*Subscribe to receive an e-mail when a new post is up, HERE.
8 Comments | Posted in Annie Sloan's chalk paint, interior design, Paint

How to Create an Heirloom: Easy Way to Add Years to New Furniture

Sometimes you buy a piece of furniture that you love but when you get it home it just doesn’t seem to “go” with your home.  This happens to me every now and again – unless I’m buying an antique.  I find that by giving it a little bit of antiquing helps quite a bit. 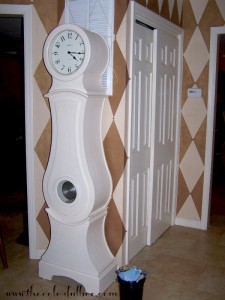 Before: Our Swedish clock before I antiqued it

I purchased a lovely Swedish clock that was reasonably priced – especially when I compared it to the real deal antiques that I’ve seen online. The all white clock just looked out of place in my traditional home.  So – I got to work, giving it a bit of aging.

I loved the simplicity of it – just a gentle aging.  But as I lived with it what annoyed me was the fact that the clockface still looked new! So I got to work aging the clockface.  I just used some glaze that I had leftover from another project that was similar to the glaze I used for the body of the clock – putting it on with a chipbrush and then smoothing it with a badger brush (but you can use any soft bristled brush that you have on hand). 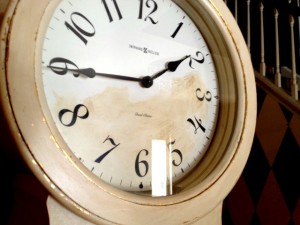 During the clock face aging 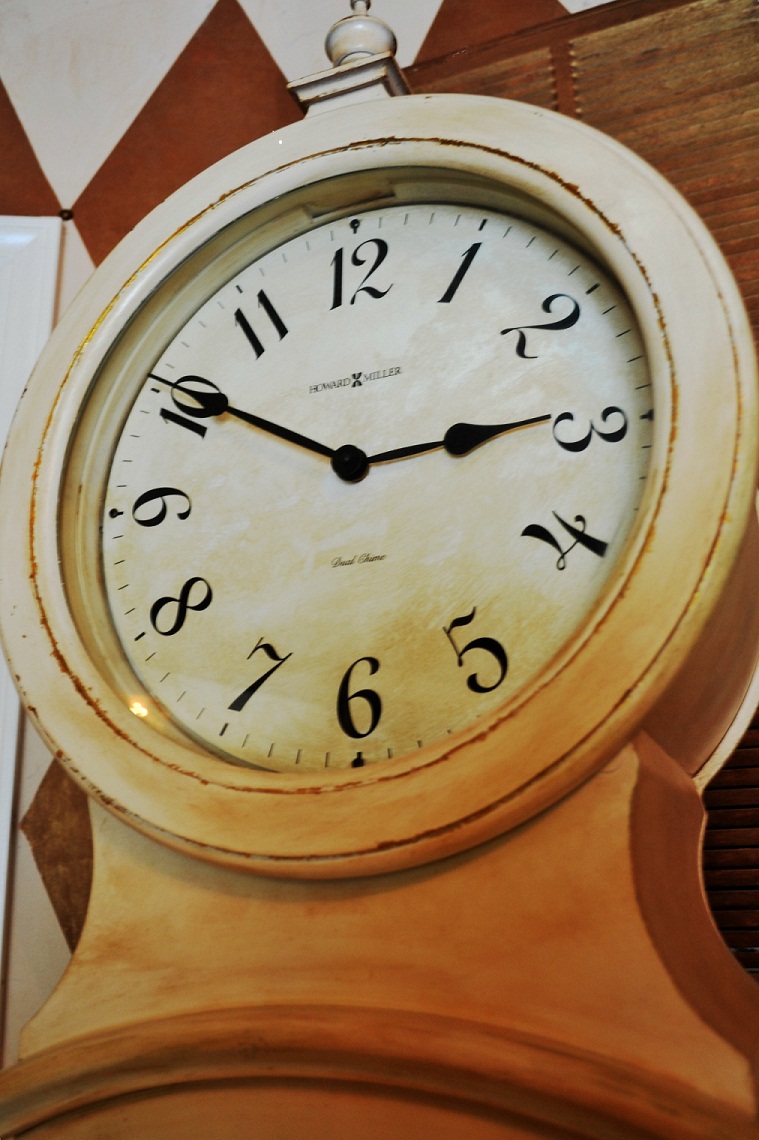 Closeup of our clock

Now the clock looks like it belongs in my home. Everything in my home shows it’s age – including me, sorry to say!  I may try to find an an antique clockface to really make it look like an heirloom.  And I may do some handpainting on it to give it a little more character. 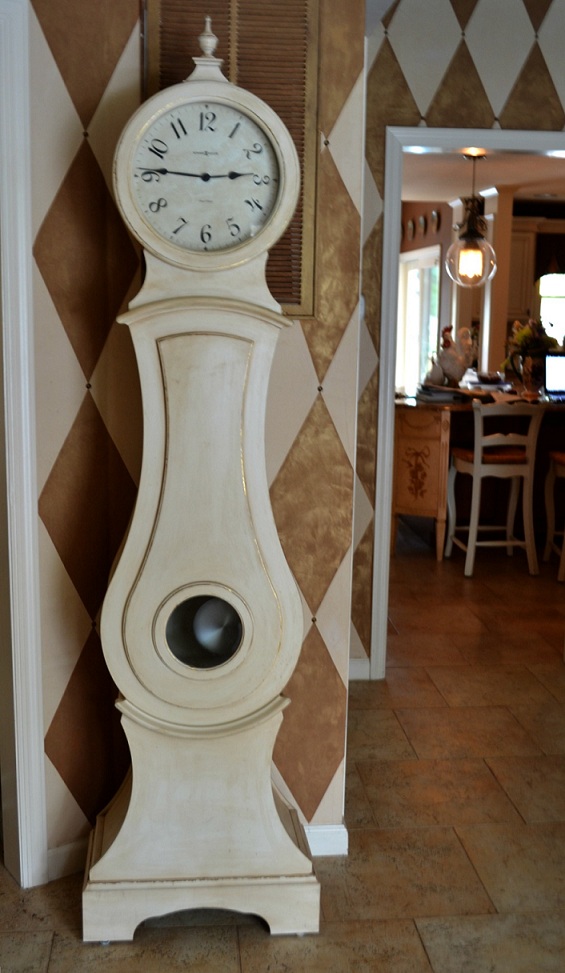 I hope you enjoyed looking at my project! If you’d like to know more about the Venetian Plaster wall finish in the entryway, click here.

Sharing this with: Funky Junk Interiors; Between Naps on the Porch; Be Colorful; Home Stories from A to Z; BoogieBoard Cottage; Miss Mustardseed; French Country Cottage; Cherished Bliss