A Quick Revamp of a Bookcase in My Great Room

Posted on January 27, 2012 by Linda
Does this ever happen to anyone else?  You think you’ve put a nice vignette together for a bookcase and then over time it just doesn’t look as good.  Well, I have a husband who likes to sneak stuff from the basement or attic and he places it where I don’t want it!  I don’t notice it right off the bat…but then I will be passing by a shelf, cabinet or bookcase one day – and there’s a stuffed toy, a frog, a silver Mexican hat and countless other absurdities that he’s collected over the years – and he think he’s adding to the beauty of the vignette. 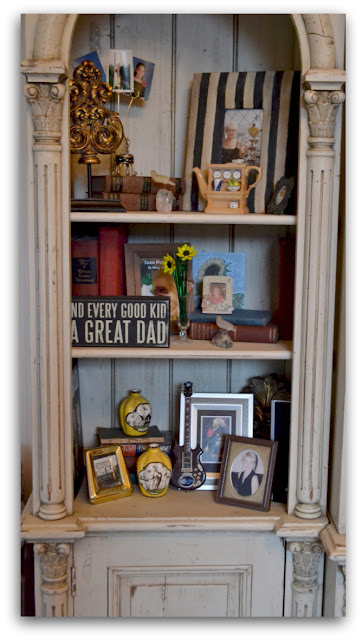 The above picture was actually worse – there also was the silver Mexican hat and a pink stuffed elephant in that mix.﻿ I had orginally done a nice little “story” that included photos and some items we picked up on travels to Europe…but slowly over time, lots of my husband’s extras wormed their way into the bookcase.  This is way too crowded – and you really can’t notice the items displayed because there’s too many of them.
This was my first revamp. It’s nice – but I’m a little underwhelmed. But I love the top grouping – a picture of me and my husband in front of a winery in Chateauneuf-du-Pape in Provence…and a pic of me at the top of the Eiffel Tower.  The frame on the right was a crappy one I picked up for a dollar in HomeGoods – but I added the black stripes and now I love it. In front of the books is a thistle that my husband picked in the gardens by the Eiffel Tower – so it’s very sentimental for both of us. The other frame is one of the first Christmas presents that I gave my husband – he loves anything dealing with the sea so this was a perfect little gift. 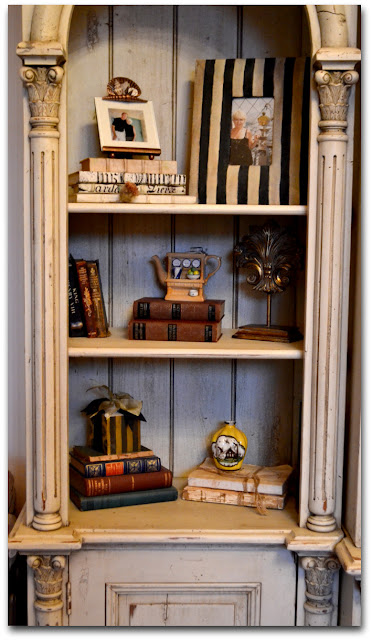 Then I tried this, above. It’s still not wowing me.  But I’m liking the middle shelf a bit.  I have some antique books by Charles Dickens that my mother owned – and a teapot that I bought in Harrads (ridiculously expensive but I bought it anyway) that has a book theme. The lower shelf looks a bit barren – have to do something about that. 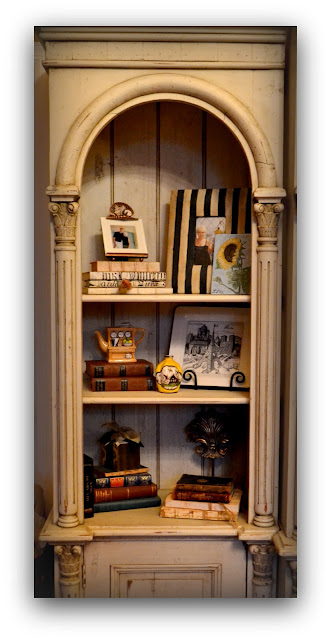 Then I came up with this arrangement.  I think I like this one the best.﻿ But – I still have to work on it a bit.  I added a picture I painted of a sunflower that I gave to my husband as a present on our first anniversary – I think it would look better in a frame on the lower shelf…so I have to work on that.  It adds some needed color to the vignette. I love the antique books in the lower shelf…but perhaps I need something other than books in this space.  Maybe I need to add the small yellow Italian vase (I also have another one like it) on the lower shelf.  These little vases were the first antiques that I bought on Long Island after moving back from here from Seattle WA. So, they hold some special thoughts for me. They would look nice with the framed sunflower artwork.  OK – now I am on the hunt for a great frame!
I will post again when I am finished with the arrangement.  Would love to get your ideas and suggestions on what I’ve done so far.  The changes that I made took me about 10 – 15 minutes and the items that I see here now mean so much more to me – so I get a good feeling about this bookcase now when I see it.
I’ll be posting my revamp of the entire bookcase – it’s really a beautiful piece. Here’s a picture of it and how I decorated it when we first got it.  The bookcase section to the right now has husband’s trademark “put everything on the shelf” design aesthetic all over it (unlike how it looks above). That’s his desk in front of it and he feels that the bookcase is his personal office bookcase.  I will publish it very soon even though I am embarrassed by it.  I have to figure out a way to make it beautiful – yet functional for my husband.  Oh boy – that’s going to be a tough one!!

Someone Stole My Lucky Charm!!
Some Recent Projects: Metallic Plaster Wall Finish and Console Revamp
The World is Praying for You
This entry was posted in Uncategorized. Bookmark the permalink.

Leave a Reply to Thoughts on Design Cancel reply